An Introduction to Laser Welding

An Introduction to Laser Welding

What is Laser Welding?

Laser welding is a versatile joining process to fuse materials through the application of a highly focussed beam of light (a laser).

Laser (Light Amplification by Stimulated Emission of Radiation) is a technology that was first theorised by Einstein in 1917, with the first working device tested in 1960. A laser can produce a directional, coherent, and monochromatic beam of light.

Directionality, coherence (when all wave fronts of the light are aligned) and monochromaticity (when all light produced is of approximately one wavelength) allow the beam to be focussed and steered into a single, very small, spot; a few tenths of a millimetre across depending on the application.

This brings us to the two primary categories of laser welding: conduction mode and keyhole mode welding.

Conduction welding involves melting a bead of metal at the joint’s surface and fusing the halves of the joint together as the material resolidifies. The defining feature of conduction mode welding is its low penetration (around 1mm), with only a small volume of material melted. This makes conduction mode welding ideal for low heat input fusing of thin-walled or very small components; it is used for a variety of applications, from car body panels to electronics. 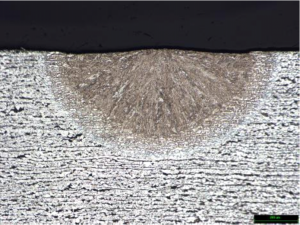 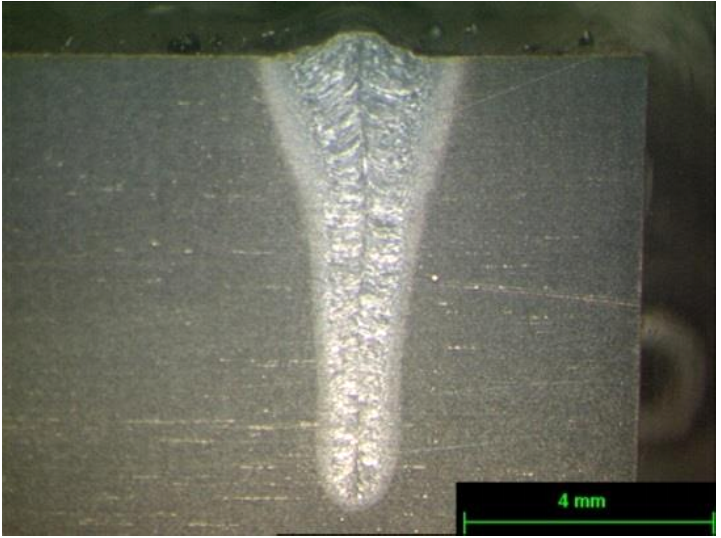 In the keyhole mode, the power density becomes high enough to not only melt, but also vaporise material. As the metal vaporises and the vapour is propelled away from the melt pool, the vapour exerts a ‘recoil pressure’ on the melt pool opposite to its direction of travel, i.e., into the melt pool. This has the effect of ‘drilling’ a hole into the material coaxial with the laser beam. This column of metal vapour surrounded by molten metal is known as a keyhole.

The recoil pressure of vaporising metal eventually reaches an equilibrium with the hydrostatic pressure of the molten metal column surrounding it, this determines the depth of the final weld. The recoil pressure is proportional, among other things, to the energy applied to the material per unit time, making it a function of the laser beam’s power and the weld speed.

The uses of both conduction and keyhole mode welding are very broad, with modern lasers providing the power, positional accuracy and long-term reliability to produce high-quality welds for both high- and low-volume production.

What are the Limitations of Laser Welding?

A range of factors can impede and frustrate the laser welding process, making it either difficult and expensive, or simply impossible to implement.

Some material groups are excluded entirely from laser (or electron beam) welding, namely those that char instead of melting. Suitable materials, mainly metals, are further restricted by issues of reflectivity, thermal characteristics, and gas affinity.

Reflectivity is a physical property of a material and varies with wavelength. It determines how much of an incoming light beam’s thermal energy will be absorbed vs. reflected. High reflectivity naturally leads to a lower proportion of the laser beam’s energy being absorbed into the material and used to form the weld. Any reflected laser light is hazardous to both the operator and surrounding machinery and structures. Protective structures around the laser welder are necessary, as even a fraction of reflected light from a multi-kW laser is a high risk. Thermal characteristics and gas affinity influence the shape and quality of the final weld, dictating susceptibility to blowouts and porosity. Titanium, for example, is extremely susceptible to porosity when welded in anything other than an argon or vacuum environment. Copper, already very reflective, tends to exhibit high rates of material ejection from the melt pool when laser welded in standard atmospheric conditions.

These limitations can be overcome with optimisation of process parameters, narrower focal spots for reflective materials and copious inert shielding gas for porosity-prone materials, but these mitigations have associated cost and risk.

Laser welding in vacuum (LV) was first trialled in Japan in the 80s and recent (2010s) advances in laser technology have reignited academic and industrial interest.

The method is now seeing industrial uptake, providing benefits over both laser in atmosphere and electron beam in certain applications.

The process of laser welding in a vacuum changes several physical phenomena governing weld formation for the better, giving a weld often indistinguishable from an electron beam weld, which until now, was the gold standard for weld quality.

The end results of laser in vacuum, compared to atmospheric laser, are:

The penetration depth increase is caused by two factors: the dispersal of the vapour plume increasing laser coupling-in efficiency and the reduction in boiling point caused by the reduced pressure of vacuum. Of these, the boiling point reduction is the dominant factor affecting penetration, with less energy required to vaporise more metal and the ratio of vaporised to molten metal increased, the welds take on a parallel-sided form previously only seen in electron beam welding. The lack of a vapour plume, due to its dispersion in vacuum, leads to a reduction in spatter and less energetic melt pool flow.

Vacuum also facilitates degassing, allowing porosity-forming bubbles to escape the melt pool before solidifying into pores. These factors combine to produce a very high-quality weld, this gives vacuum laser welding parity with electron beam in terms of weld quality on many applications.

On the process side, a laser in vacuum system offers excellent safety as a vacuum chamber also acts as photon containment. With interlocks connected to the vacuum system, making a vacuum laser welder into a Class 1 laser system is easily achievable. 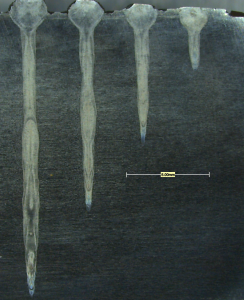 What Can Vacuum Laser Offer Over Electron Beam?

Electron beam has some challenges familiar to suppliers and end-users in the field:

A beam of electrons, as a collection of charged particles moving rapidly, is subject to the Lorentz force in the presence of a magnetic field.

This means that even a small residual magnetic field in workpiece or tooling can deflect an electron beam away from the joint during welding, this can lead to a frustrating search for the guilty component, with the machine inactive all the while.

A laser, as a collection of photons, is entirely unaffected by magnetic fields. X-ray generation when an electron beam strikes matter necessitates installation of heavy lead shielding along with regular testing to ensure the shielding is effective. Lasers require no such shielding, with the vacuum chamber sufficient to protect from any stray reflections.

What about window contamination?

Window contamination is one of the thorniest hurdles facing laser in vacuum. The laser must be coupled-in to the vacuum chamber by a transparent vacuum-holding window of very high optical clarity. When this window becomes contaminated with weld debris, it begins absorbing the laser beam’s energy. This has a very detrimental effect on the weld and will lead to out-of-tolerance welds very quickly if left unchecked.

CVE has developed multiple active and passive systems to protect the window from weld vapour, along with a contamination detection system and a rapid exchange mechanism. These systems allow CVE to develop robust, reliable, and cost-effective laser in vacuum processes for a wide range of applications.

This question is dependent on many factors and is specific to application and the customer’s priorities. Each of the three technologies have their own strengths and weaknesses and will be more and less suited to your requirements.

Here at CVE, we will work with you to find which process gives the best results for your application; we’ll then build your desired machine!

Contact us for further information, we’re here to help.

If you would like to know more about our products or speak to a member of our team, please do not hesitate to contact us. We will be happy to assist you.