What is Electron Beam Welding?

Electron beam welding (EBW) is a fusion welding process that uses a high energy electron beam to join metals together, with a wide range of applications in many industries.

An electron beam welding machine consists of an electron gun, which is a device for producing a focused beam of high-speed electrons with velocities of between 0.3 and 0.7 times the speed of light.

The electron gun is normally mounted on, or in, a high vacuum chamber that contains tooling used for holding and moving a workpiece.

The electron beam passes through the anode and on towards the workpiece, using a focusing lens to focus the beam and achieve sufficient power density to weld the two metals.

This creates a high weld quality, with deep penetration and a narrow fusion zone.

Components of an Electron Gun

An electron beam is usually formed by employing a triode-style electron gun that consists of:

How is the electron beam generated?

The hot cathode, or filament, is made from a high emission material such as tungsten or tantalum, with tungsten being the most common. A heating current is passed through to a filament that causes it to emit electrons. These are accelerated from the filament to the anode by applying a high negative voltage to the filament.

How is the electron beam controlled?

A control electrode, or grid, is situated close to the filament and is held at a negative potential in respect to it. As the voltage potential between the filament and grid is reduced, electrons are allowed to escape. These are then attracted to the anode, which has more positive potential than the electrons, or in the case of electron beam welding, the anode has a hole in its centre which allows the electrons to pass through the anode as a stream, and on towards the workpiece. 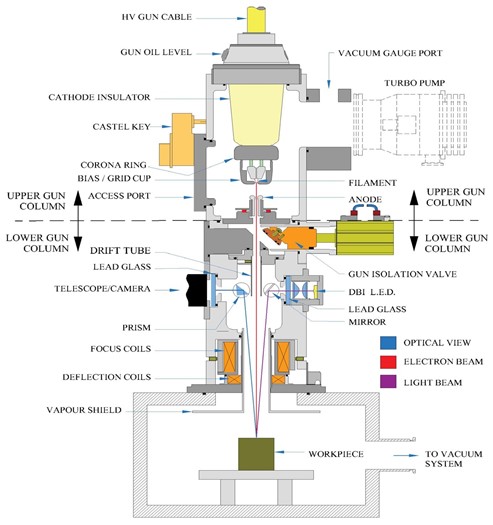 *Surfi-Sculpt is a trade mark of TWI Ltd.